FRANKFURT— Adidas AG is launching a three-year research program to develop soccer cleats that can be repeatedly recycled, use no chemical adhesives and create no waste, amid growing concerns that the world’s rise in garment consumption is hurting the environment.

Adidas is joining a growing list of companies taking green initiatives. Environmentalists largely applaud the efforts but have reservations about the actual impact.
Adidas, the world’s No. 2 sporting goods company behind Nike Inc., said the project, to be announced Thursday and funded by the European Union, would assemble experts from a variety of industries to develop a “super-material” that can be used for performance sports gear, and later be broken down and remolded repeatedly. 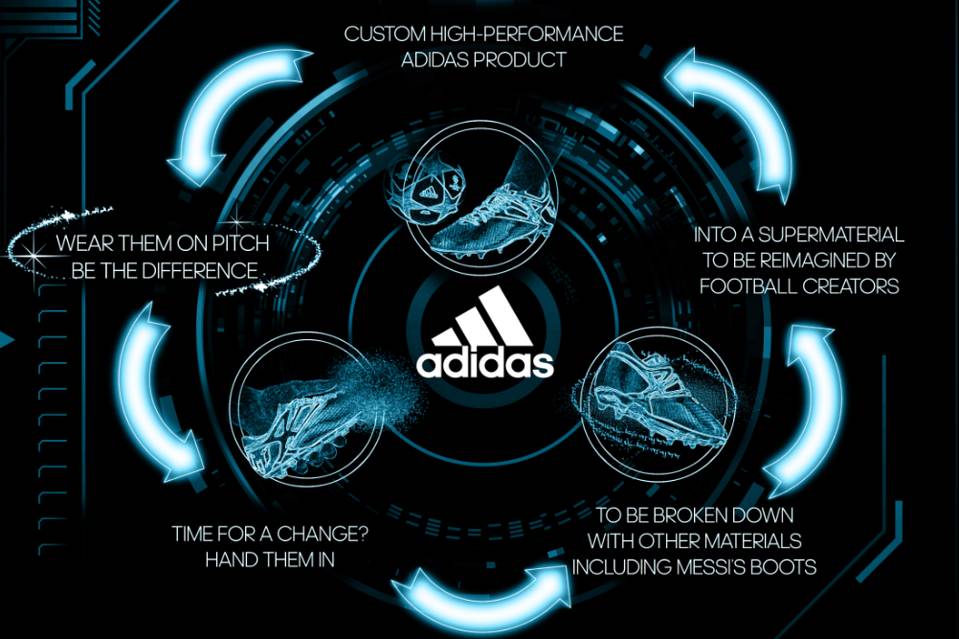 Adidas said it hopes to use the new material in anything from soccer cleats to performance sportswear and soccer balls. Photo: Adidas

“In a world of limited resources, recyclable materials is something we as an industry need to be leading in,” said Gerd Manz, technology and innovation vice president at Adidas and head of the new project.
Critics have long pointed out the environmental damage caused by a sharp rise in garment consumption world-wide. Alongside fast fashion retailers, the sportswear industry is responding to consumer patterns by manufacturing and selling an increasing amount of sportswear and shoes. In this way the industry is contributing to pollution, said Yixiuo Wu, a project leader at Greenpeace.
Sport Infinity, as Adidas’s new project is called, is one of several steps Adidas has taken recently to boost its ethical credentials.
The German sportswear giant on Tuesday said it would join Microsoft Corp., Sony Corp.and several other companies in a United Nations initiative to become a “leading example” in tackling climate change, by agreeing to measure its climate footprint and reduce emissions where possible. In April, Adidas announced a partnership with awareness-raising network Parley for the Oceans, through which it aims to make sportswear out of recycled ocean waste.
The first concept shoe created through this cooperation was however not significantly different from Adidas’s current non-green shoe collection. The yarn used for the shoe upper was indeed made of fibers from waste plastic and fishing nets, but the sole was still made out of newly manufactured plastic. Adidas said at the time that the shoe was a concept shoe only, and that it would be worked on and turned into a consumer product in coming months…