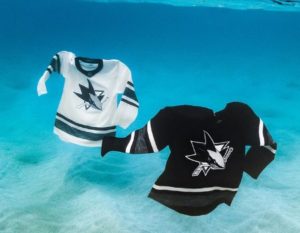 This years NHL All-Star Game in San Jose is the perfect setting for adidas to introduce environmentally-conscious jerseys that complement our focus on environmental stewardship.

Sportswear giant adidas and NHL have linked up to unveil new hockey jerseys made from Parley for the Oceans upcycled marine plastic material. Each sustainable and non-polluting jersey is “crafted to be a symbol of change in the movement to protect the oceans,” adidas said in a statement.

The materials used for the jerseys, which are called Adizero Authentic Pro x Parley, include old plastic bottles and other plastic waste taken from the ocean. Parley for the Oceans is an environmental organisation that aims to raise awareness of plastic pollution affecting the worlds oceans. It has trademarked its plastic and called itParley Ocean Plastic.

As the creator sports brand, we create products tailored for an athlete, their sport, life and world and were excited to introduce the special edition adidas Adizero Authentic Pro x Parley jerseys, said Dan Near, Sr. director of adidas (@adidas) Hockey.

The NHL is a recognised leader in addressing major environmental challenges and preserving the roots of our game, said Brian Jennings, NHL chief branding officer and executive vice president. adidas has been an incredible partner in our efforts to share our commitment to promoting sustainable business practices.

The new jerseys will be worn by the NHL’s best players at the end of the month during the league’s forthcoming All-Star Weekend, held January 25 and 26 in San Jose, California. Inspired by the colours of the game – black and white – the All-Star jerseys will for the first time feature each team’s crest. The Parley (@parleyxxx) logo features inside the back of the collar.

Jennings said: This years NHL All-Star Game in San Jose is the perfect setting for adidas to introduce environmentally-conscious jerseys that complement our focus on environmental stewardship.

The news is the latest in a string of partnership announcements between adidas and Parley for the Oceans. In 2018, Parley and adidas launched a football kit made from recycled plastic with UK football team Manchester United. In 2016, the two organisations worked together to make trainers made from upcycled marine plastics.

This long-term partnership was first initiated in 2015 when Adidas saw the importance in creating a new future for the sporting and fashion industry. adidas is a multinational corporation with a huge influence over sportswear. It is the largest sports clothing manufacturer in Europe and the second largest in the world.

Having this sort of influence meant that more could be done to develop innovative new products with sustainable solutions. In a statement in 2015 Eric Ledtke, adidas’ Group Executive Board Member responsible for global brands, said: The conservation of the oceans is a cause that is close to my heart and those of many employees at the adidas Group. By partnering with Parley for the Oceans we are contributing to a great environmental cause. We co-create fabrics made from ocean plastic waste which we will integrate into our product.