By The Atlantic Coast Conference (ACC) 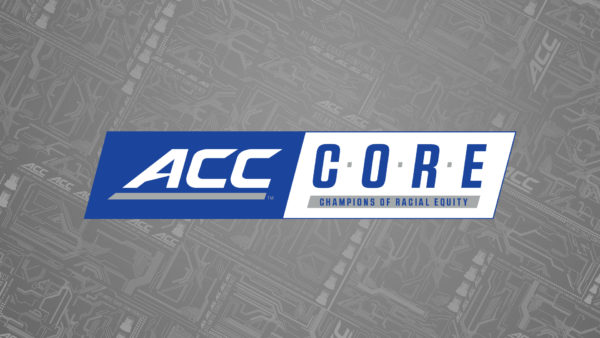 GREENSBORO, N.C. (theACC.com) – Atlantic Coast Conference Commissioner John Swofford has announced the formation of the ACC’s Committee for Racial and Social Justice. Operating under the moniker of “CORE” – Champions of Racial Equity – the committee’s vision is to lead in college athletics by promoting and instilling racial and social justice, and equity for all.

CORE is chaired by ACC Senior Associate Commissioner Mary McElroy and consists of numerous members of the conference office staff, who will work with campus representatives and Student-Athlete Advisory Committee members from each of the ACC’s institutions. The committee was formed in June and held its first meeting with the campus representatives Tuesday.

“The ACC Committee for Racial and Social Justice will work both internally at the league office, and externally with our 15 member institutions, to develop and implement action items to combat racism and social injustice within our society,” Swofford said. “Our committee will also work collectively with our ACC SAAC and staff from each of our schools to educate, empower and encourage our student-athletes to be a voice of change. The ACC remains committed to upholding the values of equality, diversity and non-discrimination.”

CORE’s mission statement is “to promote and encourage racial equity and social justice through education, partnerships, engagement and advocacy.” The ACC is committed to seeing all people as equals and treating each other with respect and dignity at all times, recognizing that our differences don’t divide us, but they make us stronger.

“I am excited to serve as the chair for this important committee as we work to create important dialogue and change,” McElroy said. “This is a critical step as we develop initiatives to bring people together and eradicate hate and racism. I am very grateful to the Commissioner and senior staff for their leadership and support, but most grateful to the ACC staff members who have volunteered to serve on the committee and work to translate our words into meaningful actions. CORE already has had insightful meetings and shared exciting ideas for the path forward. We want this to be a collaborative enterprise, where we can share resources and ideas within our conference office and with our league members in order to create meaningful initiatives to unite our community and make a difference. We will engage our league’s student-athletes by way of SAAC as well as our campus representatives to CORE.”

Among CORE’s central values and goals:

Consisting of 20 members from the ACC office, CORE held its first meeting on June 16 and is meeting weekly, while subcommittees also have been created and meet weekly to address both internal and external initiatives. As part of the first full meeting, the committee requested that the ACC office consider observing Juneteenth as an official office holiday, which was approved by Swofford.

About the ACC
The Atlantic Coast Conference, now in its 68th year of competition and 15 members strong, has long enjoyed the reputation as one of the strongest and most competitive intercollegiate conferences in the nation. ACC members Boston College, Clemson, Duke, Florida State, Georgia Tech, Louisville, Miami, North Carolina, NC State, Notre Dame, Pitt, Syracuse, Virginia, Virginia Tech and Wake Forest continue to build upon the cornerstones on which the league was founded in 1953 with a consistent balance of academics, athletics and integrity. The ACC currently sponsors 27 NCAA sports – 14 for women and 13 for men – with member institutions located in 10 states. In August 2019, ESPN and the ACC partnered to launch ACC Network (ACCN), a 24/7 national network dedicated to ACC sports and league-wide original programming. For more information, visit theACC.com and follow @theACC on Twitter and on Facebook (facebook.com/theACC).