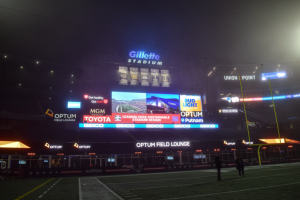 The New England Patriots have been on the “Leading Edge” of pro football since 2001. After all, they are about to play in their ninth Super Bowl¹ in the 18-year Belichick-Brady era on Sunday when they take on the Los Angeles Rams in Atlanta.

Thus, it is fitting that the first Leading Edge Sustainable Stadium Design Conference was hosted by Excel Dryer and D|13 at the Pats’ Gillette Stadium last month.

The conference’s centerpiece was a discussion among a panel of Green-Sports All Stars.  They took a deep dive into the past, present and especially the future of green sports venue design and operations, with an emphasis on how to make stadiums and arenas as energy efficient and fan-friendly as possible.

The opportunity to earn Continuing Education Unit (CEU) credits along with the chance to throw and catch passes on the same field as Tom Brady and Rob Gronkowski were likely what drew architects — as well as contractors, property managers and more — to Gillette Stadium on a foggy January night for the Leading Edge Sustainable Stadium Design Conference.

But it was the panel discussion, moderated by Joe Khirallah of Green Bear Group, on the Green-Sports movement’s past, present and future, that kept the audience’s rapt attention.

“At several points during the discussion, I looked out to the audience and noticed that no one was looking at their cell phones,” observed panelist Scott Jenkins, GM of Atlanta’s LEED Platinum Mercedes-Benz Stadium and Board Chair of the Green Sports Alliance. “Not one person. I don’t think I’ve ever seen that before, and I’ve been on a lot of panels.”

According to conference host and panelist Jim Nolan, who as COO of Kraft Sports + Entertainment (KSE) is responsible for operating Gillette Stadium as efficiently as possible, sustainability has been a core tenet since the building opened in 2002.

“I am fortunate to work for an owner — Robert Kraft — who cares about the environment,” Nolan shared. “Our number one priority is to reduce fossil fuel consumption. Second is to do as much as we can to reduce our waste stream. Every innovation we consider is examined through both financial and green lenses. We say ‘go’ on new cleantech innovations when they become economical.”