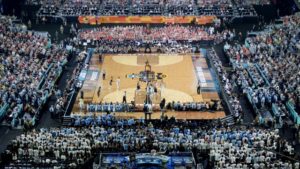 The 2017 NCAA Final Four Basketball Championship held in Phoenix this April has earned the top-level Evergreen Certification for its sustainability efforts and achievements, the Council for Responsible Sport and Phoenix Local Organizing Committee announced. The Council for Responsible Sport is an Oregon-based not-for-profit organization that provides independent verification of the socially and environmentally responsible work event organizers are doing.

“The 2017 Phoenix Final Four is proud to have attained this level of certification. From the start of our local planning we made a commitment to Sustainability,” said Dawn Rogers, 2017 Final Four LOC Executive Director and CEO. “We are thankful for the partners we had across Arizona including donors, cities, organizations and the thousands of volunteers that worked hard to deliver an exceptional experience to Final Four fans. This really is a shared achievement by everyone involved.”

Dan Gavitt, Senior Vice President of Basketball at NCAA remarked, “The NCAA is both proud and deeply appreciative of the efforts of the Phoenix Local Organizing Committee and all of our partners for achieving the highest level of certification for sustainability.  The 2017 Final Four was highly successful in every way, and to be recognized as a socially and environmentally responsible event means we accomplished another important goal.  It is fitting that the entire community of the naturally beautiful Valley of the Sun helped reach this remarkable achievement for the 2017 Final Four.”

“Congratulations to the local organizing committee, NCAA, sustainability committee and all the contributing partners on this unprecedented level of achievement with regards to social and environmental responsibility for the Final Four,” said Ray Anderson, Vice President for University Athletics at Arizona State University. “It makes me proud to be part of the community that so fully embraces the values represented in this certification effort.“

“We set out to ‘Leave a Legacy’ through the power of sports. Evergreen level certification is not only attainable, but opens new partnership opportunities, decreases costs and liabilities and increases fan engagement and experience,” said Colin Tetreault, chair of the 2017 Final Four sustainability committee. “Credit for reaching this goal is due to the willing efforts of many partners — from the NCAA and local organizing committee, to the myriad regional partners and tireless team members of the sustainability committee.”

The Evergreen level certification was earned by achieving more than 90 percent of the 61 total best practice standards offered in the Council’s framework across five categories including: planning and communications, procurement, resource management, access and equity and community legacy.