2016: A Tipping Point for the Sports Movement?

2016: A Tipping Point for the Sports Movement? 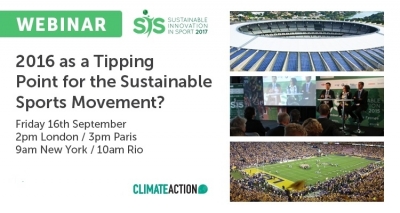 2016 has been a very exciting year for the sports industry, with the quadrennial UEFA European Championship and Rio Olympic Games running alongside many other major sports events that take place globally every year. Vast progress has also been made in terms of bringing the environment to the forefront of the global sporting stage, notably through the Rio Olympics Opening Ceremony, leading us to ask the question: has 2016 led to a tipping point in the sports movement?

The webinar started with an introductory reflection on the title question by each panel member. The general consensus was that, although there has been great progress in recent years, we have not yet reached a ‘tipping point’. All, however, agreed that momentum behind the sustainability in sport movement has grown steadily, and expressed hope that it will be reached in the near future if we continue to put sustainability first.

David pointed to the Lillehammer 1994 Winter Games, and the Sydney 2000 Olympic Games as the first major sport events that brought sustainability to the attention of the world, and discussed “the fantastic power of the Olympic brand and sport generally to motivate and inspire”. He went on to describe measures taken by the London 2012 Olympic team, believing their commitment to sustainability was the key component in winning the bid from the IOC in the first place, and expressed praise for the Rio 2016 team for taking it even further.

Jill then moved on to discussing important developments in the sector, including the Global Reporting Initiative which created a standard for event organisers, the IOC Agenda 2020 which includes 2 out of 40 recommendations for future Olympics that directly reference sustainability, and the huge membership growth of the Green Sports Alliance. She also cited the America’s Cup Team Land Rover BAR as an example of one of the first professional sports teams to embed sustainability wholeheartedly into its practices, and expressed the importance of sport being integrated into the Sustainable Development Goals.