10 to watch in sustainability

10 to watch in sustainability
BY BRET MCCORMICK AND DAVID BROUGHTON
10.24.2022 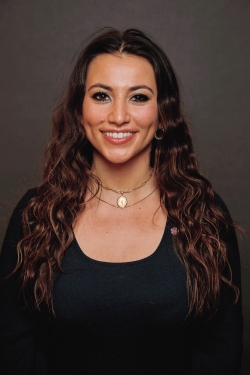 Since 2020, when Armenakian was named the Atlanta Hawks’ first director-level team executive focused on sustainability, State Farm Arena became the world’s first (and only) sports and entertainment venue to receive Total Resource Use and Efficiency Platinum certification, as the Atlanta Hawks went from a 10% waste diversion rate to +90%. The Georgia State graduate recently helped launch the Oak View Group-led Green Operations and Advanced Leadership, an Amazon Web Services-powered platform that will help venues operate in more environmentally friendly ways. The trilingual native Armenian was previously the conversion and sustainability manager for Mercedes-Benz Stadium as part of AMB Sports & Entertainment, growing the staff from an eight-person team to a 60-person operation. — D.B. 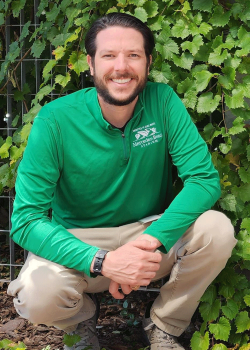 Bohenko’s sustainability work grew out of his time in the film industry trying to find places to donate leftover food that film crews hadn’t eaten. Now, he helps drive Mercedes-Benz Stadium’s zero waste efforts; less than 10% of the venue’s waste goes to the landfill. That’s a huge achievement given the 71,000-seat stadium produces 20 to 25 tons of waste per event. Controlling waste streams during Falcons and Atlanta United games has become easier, but it’s still tricky when outside entities, like concert tours, come through the building. Bohenko arranged for 45,000 AAA batteries from light-up wristbands given out during a recent Coldplay concert to be salvaged and correctly recycled. — B.M. 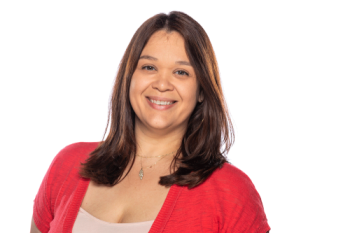 Ventura earned the unfortunate nickname “COVID Queen” for her tireless work to get Chase Center safely opened during the early months of the pandemic, but her focus has since shifted back to sustainability efforts. Chase Center averaged 87% landfill diversion last year; the goal is to hit the 90% or better TRUE Zero Waste designation rate this NBA season. Toward that effort, Ventura and the Warriors are considering how to use artificial intelligence to help sort waste streams. The venue (and team) also moved from 50% renewable energy when it opened to 100%, through solar power purchases from California power company PG&E. — B.M. 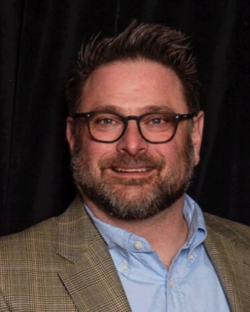 ListerCOURTESY OF THE BOSTON RED SOX

Fenway Sports Group’s ability to steer sustainable venue operations, and potentially influence fan behaviors, is significant with Fenway Park, Liverpool’s Anfield, Pittsburgh’s PPG Paints Arena, and the Red Sox’s spring training facility in Florida all under the FSG umbrella. Lister oversees that work at Fenway Park, which has a rooftop garden and was the first in Major League Baseball to install rooftop solar panels, and at JetBlue Park in Fort Myers, Fla. The solar panel array at MGM Music Hall at Fenway produces power that’s used at the neighboring home of the
Red Sox. — B.M. 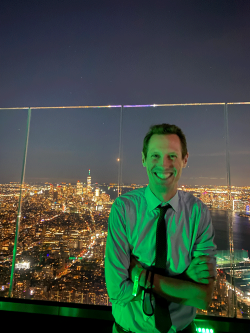 Climate Pledge Arena was built with sustainability front of mind, but that raises the pressure on Johnson to make sure the building lives up to expectations. Johnson’s background is in urban planning, specifically transportation. Based on fan surveys conducted after every game, 20% of Kraken fans are taking public transportation to the arena. Climate Pledge Arena is working with PepsiCo to eliminate single-use plastics by the end of this calendar year and is closing in on TRUE (Total Resource Use and Efficiency) Zero Waste certification after hitting 95% waste diversion every month since May. The arena has been open only a year but its clearest long-term contribution to the sustainability movement could be the tracking tools it’s working to develop with the help of Amazon and building part-owner, Oak View Group. — B.M. 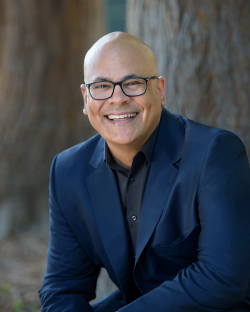 From its conception in the mid-2010s, Golden 1 Center was an environmentally conscious structure, and the attention has carried over to operations. Rodrigo said the Kings are looking to soon move completely from gas to electric power. Using artificial intelligence, the arena is beginning to learn how to run itself more efficiently, and the team built an electric vehicle powering station in downtown Sacramento that draws its energy from Golden 1 Center’s solar power resources. The arena had an easier time dealing with supply chain issues than many American sports venues because all of its food comes from within a 150-mile radius. Venues are ground zero for sports sustainability efforts, in part because they touch, and can influence, every area of a sports business, so Rodrigo and the 12 departments under his purview have an extensive reach. — B.M. 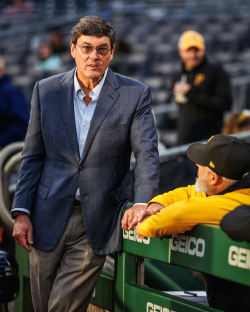 In 2008, one year after becoming the Pittsburgh Pirates’ principal owner, Nutting, an avid fly fisher, skier and conservationist, launched PNC Park’s sustainability policies that have lead to, among other things, a waste diversion rate of more than 80% and the 2018 creation of the ballpark’s Urban Garden, whose primary watering source is the rainwater collected on-site and fed partially via the team’s composting actions. The Natural Resource Defense Council awarded the Wheeling, W.Va., native its 2013 Game Changer Award. He is also the CEO of Ogden Publications, whose Mother Earth News and other media brands promote sustainable living and a rural lifestyle. — D.B. 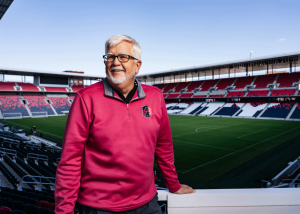 During Abernathy’s quarter century with the St. Louis Cardinals, he was part of the design team for Busch Stadium (which opened in 2006), and within two years helped reduce the ballpark’s energy consumption by 23%, generating a savings of more than $300,000. He helped create MLB’s sustainable ballpark operations data collection program and the league’s Green Glove Award that recognizes the team with the highest rate of waste diverted from landfills. The Missouri University of Science and Technology (mechanical engineering) and Southern Illinois (MBA) graduate served on the Green Sports Alliance board from 2012-20, and is now helping to implement Centene Stadium’s sustainability efforts. — D.B.

When it comes to environmental sustainability, the Twin Cities is arguably the greenest market in sports, boasting public officials and pro and college team-level executives who are
heavily vested in the cause at some of the industry’s most sustainable venues. Three team executives are leading the way. — D.B. 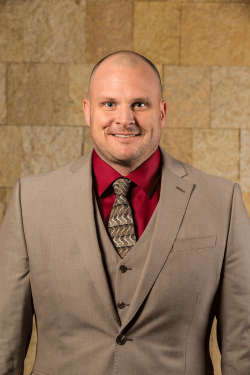 Target Field this summer became the first MLB venue to be awarded LEED Platinum certification under the U.S. Green Building Council’s updated rating system, giving the Twins a most-in-sports five separate LEED certifications since the ballpark’s 2010 opening. Under Glawe’s guidance, the club won MLB’s 2021 Green Glove Award by diverting nearly 99% of its waste from landfills (up from 70% in 2010). The team won the USGBC 2019 Leadership Award for being a “model for sustainability in the sporting world.” 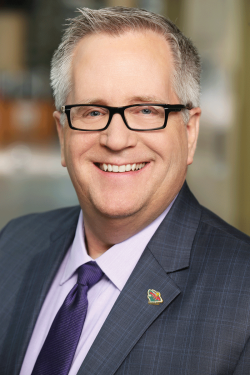 Ibister designed the sustainability model that helped the Minnesota Wild’s Xcel Energy Center and the adjacent convention center in 2014 become the world’s first facility to achieve LEED, Green Globes and American Society for Testing and Materials certification simultaneously. Over the past decade, a solar thermal array (the largest in the Midwest) and solar photovoltaic system have been added, the installation of LED lights and scoreboards have dramatically reduced energy consumption, and the arena’s recent LEED Platinum certification (with a score of 81 points) makes it one of the planet’s greenest arenas. 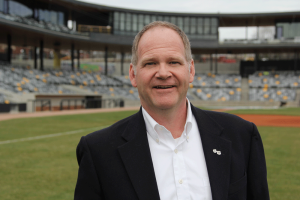 Whaley started with the Saints in 1993 and was the voice of sustainability during the evolution of a heavily contaminated brownfield site into CHS Field in 2015. The ballpark is home to a solar array that supplies 17% of the venue’s electricity, a 27,000-gallon steel cistern tank where harvested rainwater is treated and used to irrigate the playing field and supply flushing water for the stadium’s public toilets, and offices designed with natural light and airflow. The St. Louis University Law School graduate also initiated a vigorous waste diversion effort into CHS Field’s operation. 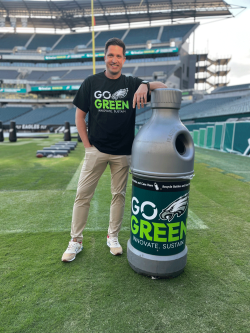 Director of Fan Experience and Sustainability

Vossschulte’s approach to sustainability work stems from his time at Disney, a storytelling company, and his background as a public relations spokesman. The Eagles have worked hard on sustainability messaging through corporate partnerships. They work with petrochemicals company Braskem, which takes broken stadium seats from Lincoln Financial Field and turns them into pellets to make park benches, and with NRG, which owns and operates the stadium’s massive solar panel array that creates 40% of the building’s energy. The team also collects bottle tops removed from drinks sold at the stadium and is making a giant Lombardi Trophy out of them, which fans can take their picture next to, a subtle way to introduce sustainability to Eagles fans. — B.M.